Seven Months In And Things Are Slowing Down

Seven months have passed and I am now starting to feel the results of the Late Notes that are now Charged Off in my Net Annualized Return. 16.36% is still in the neighborhood of my target 16%. I still have six Late Notes that I am steeply discounting, but it appears that they rarely sell.

I've received enough interest to offset the complete loss of the Charged Off and remaining Late Notes assuming they are all worthless. The total interest I've received amounts to 6% of the money I deposited. Now we are on to start growing again (back to the beginning).

When ranking the risk of my Notes (which I use to determine asking price when selling, 16% - 32%), I weighted most heavily (5 times the weight of the least weighted):


I am now increasing the weight of the Grade of the Note to the same level (was weighted the least, now weighted 5 times higher). I have an uncomfortable number of G Grade Notes. I would rather sell those than hold on to them. 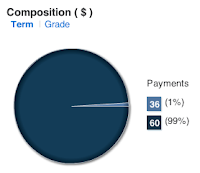 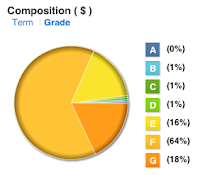 Lending Club has also been making some changes, or rather FolioFN, specifically to the way Browse Notes works. On the positive side they got rid of the confusing checkboxes for Rate and replaced it with a Range. Much better.

I now choose Notes by looking at everything. I sort first by Yield to Maturity (click once to sort ascending) and then I sort by Remaining Payments (click twice to sort descending). This gives me newly issued Notes with the highest Yield to Maturity. I then look for the Accrued Interest over $0.50, meaning the Note will soon (hopefully) make a payment. This way I get the first payment (which is mostly interest) and hold it just a short period of time before I get that interest. Then if it sells, I get a (mostly) interest only payment, get my Principal back and a premium in a small period of time.

I am not buying exclusively Issued Notes, as there are some great deals in the rest of the Notes. Those I just chose Never Late only and sort by Yield to Maturity. I'm not sure how much of a mix between Issued and Current Notes I'm going to buy. I'll still need to play with that.

Bottom line is that I have taken some lumps (and still waiting for 6 more Notes to be Charged Off) and am still at my minimum target. I look forward to clawing my way back up above 18%.

Email ThisBlogThis!Share to TwitterShare to FacebookShare to Pinterest
Labels: status