Six Months and I'm Reaching A State of Peace

I did have one Note finally go into Default (Charge Off). However, I did get some money from collections ... and then the collection fee ate that recovery up.

I went through and looked at the Notes that were Late and noticed something ... I had three Notes from one Loan that went Late! Three Notes! Not just one or two, Three! I went through my list of Notes and sorted by Loan number. I got pretty good at looking at the last digit to see quickly where I had Notes from the same Loan. I culled out another half dozen from back in the day before I watched for duplicate Notes.

So, lessons learned. First, check the Note before you buy it to make sure they haven't already failed a payment (apparently they still show up as never late). Second, make sure you do not have more than one Note from the same Loan (or Notes worth more than $25). Third, treat Grace Period as the plague. Grace Period sells, but Late does not (only 7% of my Late Notes sold while Late).

As far as returns, Lending Club is still reporting my NAR above 20% (although I am considering those Late Notes as Charged Off already. I've sold more than twice as many Notes as I currently hold, so about every three months I cycle through Notes. Of the Notes I hold, they are worth an average of $24.88. I've held them for almost two months on average. Of the Notes I've sold, I've held them for an average of 19 days (almost three weeks). My median annualized return on Notes sold is 33%, however I like to use a Days Weighted Average (the longer I hold it the more it is weighted) which is 72%.

I feel like I'm emerging from the Fire Swamp, and now it's time for Prince Humperdinck, I mean Tax season. (Maybe I will name my portfolio Buttercup).

Email ThisBlogThis!Share to TwitterShare to FacebookShare to Pinterest
Labels: status 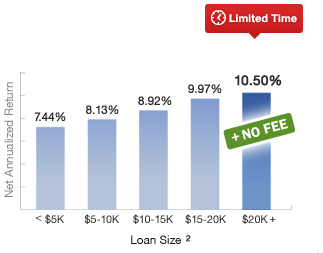 While I love the great state of Texas, I am disappointed in their regulation of citizens investing in Lending Club. There are many states that prevent their citizens from funding Lending Club Notes, and unfortunately I live in one of them. At the end of this post, I have a summary of a strategy I think will give huge returns for those in states who can fund notes, with really low risk.

Lending Club is offering a No Maintenance Fee for the life of loans over $20,000. The added bonus is that loans of that amount have the highest return, in general. 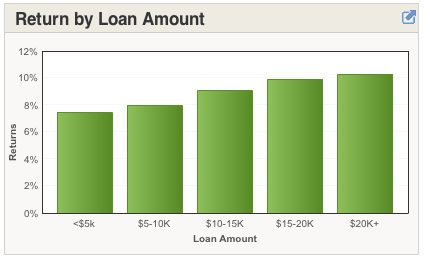 To get the best returns with the least risk, fund notes in the Grade E and Grade F range. While these Notes have higher theoretical risk, there are ways to mitigate those risks we'll talk about later. Grade G Notes can go way too low of a return, while not getting much better high range than Grade F (as well as the average return is worse).

To continue to maximize your return, you can fund 60 month Notes (versus 36 month Notes). Lending Club gives a higher risk value to 60 month Notes, which translates into higher interest rates, 2.05% to 4.5% higher (see interest rate factors). True, the longer term Notes have more risk, but again there is a way to mitigate that risk.

There seem to be two major camps of loan buyers. Michael at Nickel Steamroller focuses on highest Discount. This approach looks for the steepest Discounts or lowest Markup on Notes as opposed to highest Yield to Maturity. This approach appears to get you the most for your money.

The second approach is looking for the highest Yield to Maturity. This approach assumes that if the Note is held until it matures, and it does not default, you'll get the highest return. Of course, with Grade E and Grade F notes at 60 months, that seems like a bit of a stretch.
Yield to Maturity seems to be a very popular method of choosing Notes (hence the Nickel Steamroller post warning against it). It is the approach I use to maximize my return. I've heard many people wonder why people would buy a newly funded $25 Note for $26.50. The three reasons I can think of are (a) they are looking for the Note to be held to term and not default, (b) they are looking to sell the Note to an (a) at a slightly higher premium or (c) a combination of (a) and (b). 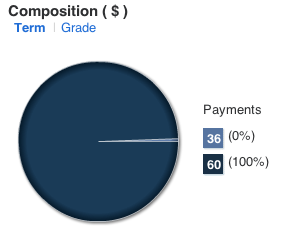 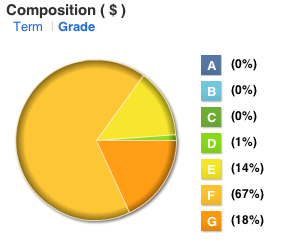 I am a (c). I buy mainly Grade F Notes with a smattering of Grade E and Grade G (yes, I know G is a lot riskier with lower return). I tend to also buy some mature Grade C and Grade D on occasion when I have under $20 available to buy Notes. I also buy mostly 60 month Notes. Both the Grade and the term of the Notes I buy is not really a conscious decision, but a byproduct of buying the highest Yield to Maturity Notes.

So to maximize potential return, here is my recommendation for those who can Fund Notes:

Upon Funding, sell the Note at a 5% Markup. You'll get an immediate 5%, assuming it takes a month from the time you pledge the money for Funding to the time you get the money back from the sale. Annualized that would be more than 50% return. This cuts your risk because no Note will ever default because you sell them before their first payment.

This strategy is based on current market conditions. If too many people flood the market with high Yield to Maturity Notes, you'll have to reduce your Markup to get your Notes sold. I in no way guarantee that this strategy will work as described as the market place can change dramatically based on a number of conditions.

Why Lending Club is a Scam (Hint: It's not)


My parents visited us for Christmas. I owe a lot to my parents. From my father I learned the importance of temperance and striving for a spiritual life. From my mother I learned frugality and efficiency. With my father I often discuss politics and philosophy. With my mother I often discuss finances and investing. This particular visit, I mentioned that I was investing in Peer to Peer lending. The first thing she said was, "It's a pyramid. Get your money out while you can." This took me aback, but after thinking about it, I wasn't surprised. One of the common phrases I heard growing up was "never be the first on your block."

This leads me to Peter Renton's No Google, Lending Club is Not a Scam post (sociallending.net). It got me to thinking. Why would someone search for "Is X a scam?" While pondering this idea, I read Seth Godin's How much are you going to tip? post (sethgodin.typepad.com). This example he gave struck me:

I mean, if they were out just the two of them, would they ask what people at the other table were going to tip?

I've heard it said that all you need to have an opinion is a mouth. I guess the internet-age equivalent is, to have an opinion all you need is internet access. Searching (or is it googling) is an art. Using it for research on anything can be misleading at times, but especially for new and disruptive ideas. There is the idea of the S-Curve (see Wikipedia Diffusion of Innovations). 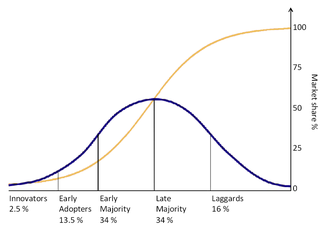 The S-Curve is a visual representation of the Gandhi quote at the beginning of this post. A very small number of people in society adopt a new idea. At first no one pays attention to it. Then it starts growing from just the innovators to the early adopters. This is where people laugh at you, as Gandhi said.

Next as the early majority starts joining in, those who see it disrupting status quo start whisper campaigns against it, as well as those with ill intentions see an opportunity to make a quick buck. Somewhere between early adopters and early majority, the government usually steps in with regulations. They want to make it "safe" for everybody. If it can survive the whisper campaigns, the malintent opportunists and the regulations, then we get the late majority and finally the laggards. My parents advice to "never be the first on your block" places you firmly in the late majority to laggard stage.

There is nothing inherently bad about being a late majority or laggard. And most people are not 100% in any of these categories (I believe my parents were the first on their block to have Magic Jack phone service). Some people are laggards just because they were born too late (I am a TV and telephone laggard). Most people tend towards late majority and laggard as they age (things just change too quickly).

With investing, while there is risk in being an innovator or an early adopter, it is matched with a large reward. If you are investing before the early majority hits, you can benefit from the surge. For those who are constantly investing as innovators or early adopters, you understand that there is risk and you expect to lose sometimes.

There is only one way to learn, through experience. There is only one way to get experience, through mistakes. However, there are two types of mistakes, your own or someone else's. If you rely solely on your own mistakes, it will be a tiring, expensive and demoralizing experience. You will find the most success in using a balance of the two. Try to learn all you can and at the same time, take some action. Expect to make mistakes.

So back to the idea of a scam. There are two types of "scams." One is when the other intentions of the other party of to take as much of your money as possible without giving you equivalent value. The second, and more pervasive in internet "scam" searches, is when the other party has full intentions of giving you the stated value, but the person puts the blame of their lack of education behind the word scam.

So is Lending Club a scam? You'll probably find more and more in internet searches as Lending Club grows, and for them, they feel they were scammed. For those who educate themselves, learning from their mistakes and those of others, you'll know if it is a scam, or you will get some valuable experience.

(In my opinion, Lending Club is not a scam. I believe that they have full intentions of helping their customers receive as much benefit as they can from their investment. Oh, and for my mother, it is regulated by the Securities and Exchange Commission.)


For help in finding Notes in FolioFN or selling Notes before they mature, see posts about Lending Club Extension.